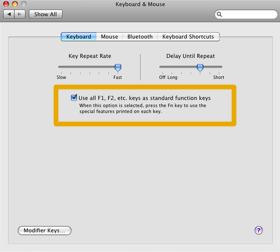 If you have a MacBook, MacBook Pro or are using Apple’s Aluminum Keyboard, you can control some commonly used functions, such as iTunes playback, volume, Dashboard etc., directly with the function keys at the top of the keyboard. These keys actually have dual functionality: either they control the functions mentioned above, or they act as ordinary function keys (F1-F19) and trigger whatever action the current application has mapped to them.

Sometimes it would be handy to be able to switch the function keys mode without the need to launch System Preferences. If you happen to run Windows in VMWare Fusion or Parallels, you might have noticed that many apps in Windows make use of the F-keys. Mac applications usually offer shortcuts based on pressing a letter or a number together with one or more modifier keys. On Windows the use of the keys F1-F20 is more common.

The problem is that when your Mac’s function keys are set to trigger the special functions instead of the F-keys by default, you have to press the fn key together with the appropriate function key. And if some command in a Windows application is triggered by Ctrl+F3, you’d need to press fn+Ctrl+F3. Due to the location of the fn-key, this can be quite difficult.

That said, a quick way to toggle the function key functionality would be handy. After searching around for a bit, I found a pretty easy way to achieve this via AppleScript.

How to toggle Fn keys with Applescript

What this AppleScript does is simply launch System Preferences and toggle the appropriate checkbox. It’s not instant, since System Preferences actually has to be launched and quit when the checkbox has been toggled. But it’s definitely more comfortable running this script from the script menu than doing it all by hand.

If you want to give this script a try, here’s what you need to do: